I've been inspired especially lately to do some writing that is autobiographical. My friends, Sam and Greg have both recently posted openly about hard times in their lives and I think it is beneficial for us to  share stories of our more difficult times because it connects us as humans.

On Friday a group of us got to meet with Kushal, founder of Vittana and to start he asked us why we were interested in social innovation.

I had not consciously thought about it before but I love film because I love telling stories about people. People are the most wonderful thing in this world. We are important and we all have unique stories, but we also share the same emotions. We are connected, whether we like it or not.

So look forward to more posts about ME. Or never come back. That works too.
Love, Lawsy at 11:53 PM No comments:

There's this article about a Japanese robot that was programmed to "love."

Speaking of being in love with technology... Christian Bale's stand-in got his own Batman suit...Think about that for a second. You want to be that guy.

I want to do a mash-up of:
Girl on Fire - Alicia Keys
The Edge of Glory - Lady Gaga &
Set Fire to the Rain - Adele

Can anyone help me with that? I just pretend like I have musical skills, but I don't.

Does anyone want to teach me voice lessons over the summer? I'll teach you something in exchange...anything you want.

If you go to the restaurant "There's no place like Home" in LA...I recommend the chicken pomodoro sandwich.

The summer after my Freshman year I blogged everyday. Every. Day.

We were lucky enough to have Ross McElwee come screen his movie and speak to us in two different forums at BYU. He is a cool guy, who I can appreciate a lot more than when watching his movie, Bright Leaves, was the last thing I had to do to get into the film program--at the time it nearly killed me.

Those are all generalizations.

Let's take a moment and remember Mr. Roger's and all the things we learned on his show.

Documentaries are good. They show us how the world works. They introduce us to people we would never meet otherwise.

Ross's work is interesting because some of his films are autobiographical, which brings me back to when I used to blog everyday. I would talk about my life. Then I thought my life was too boring so I stopped. But, maybe it's not. Maybe we all have very interesting lives and we shouldn't keep ourselves from talking about them.

It seems self-indulgent, but I it's not. We love reality tv. We love watching the news. We like real life. Conclusively, we should all tell our own stories.

Lastly, this week's Parks and Recs was Uh-MAZE-ing.

She is the wooooooooorst.
Love, Lawsy at 6:36 PM No comments:

I'm So Charitable and Other Humble Things...

Disclaimer: This is not turning into one of those "I am a wonderful human with a wonderful, perfect life" blogs...I just happened to have a good week.

In MCOM we were invited to "buy a stranger a Coke". Originally I was going to use it as an excuse to be adorable and win over some attractive male...

Well, my friend Diana is a good person and she arranged for us to feed a whole group of strangers an entire meal. I just cut the potatoes, but it felt good to serve.  There was no actual Coke, but I think it counts. 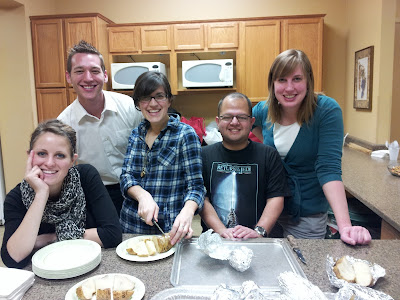 Speaking of strangers, here's a group of people I didn't know. 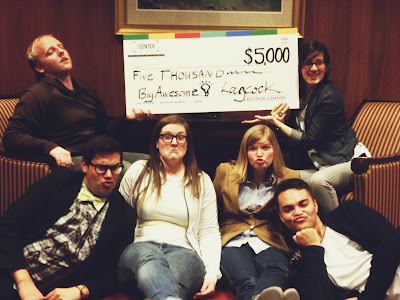 But we ended up being a dream team. The Laycock center is in the middle of the Fine Arts Center on campus that encourages inter-departmental relations (collaboration, that is).

So they kicked off this 24-hour competition and we had to get in groups of five with at least three different majors.

Thus it happened that one (1) Visual Art Major (and his kick-a GF), two (2) Communications majors, and two (2) film majors became one.

We combined all of our talents came up with a nifty campaign including a video and an animated logo and a budget. It was nice to use all of our strengths.

Then we were in the top three. And then we won the money to develop our campaign further. All only 26 hours after hearing about the project. 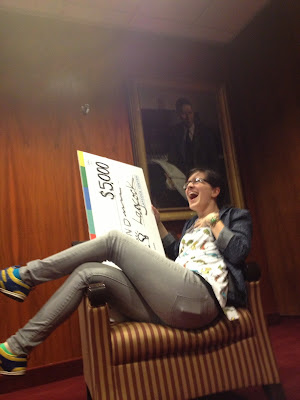 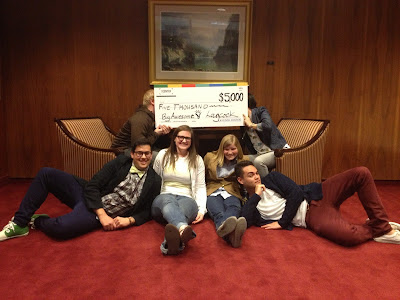 But here's the really cool part. If I hadn't done this competition I wouldn't know about vittana.org an organization that helps students in poorer countries fund their education.

It's like another organization kiva.org and works through micro-financing. You loan the money so someone can get an education and after they graduate they pay it back and you can invest the money into someone else's education. People are given opporunities they couldn't otherwise afford, but still are self-sufficient.

We serve other people because we care. It doesn't matter how well we know each other, we should just buckle down and get things done.