Everyone in Bari is Crazy

Okay,
the subject line may sound like an exaggeration or overstatement.
I am happy to say that it is not.

First of all there is our beloved English course.
Okay, so there are some normal people in there. But there is also this guy who never moves a muscle in his face and then says one profound statement each class.
He reminds me of the brother on I Love Raymond.

And there is "Ninja Turtle" who we refer to as such because we don't know his name and he has a green puffy jacket and matching green puffy gloves. He was telling us all about our horoscopes.
"You are a Gemini!
Oh, you should start a business"

Last night we talked about our fears and these two older men were like,
"Nothing. I am fearless"
And well, it helps that everything is a little bit funnier coming from them who don't speak the language perfectly.

Less Active work is tough because Francesca doesn't want to go to church because she hates Bari and everyone sounds like they are from Bari and she hates it. She has read all this stuff about the second coming of Jesus Christ and talked forever about everything under the sun except for what we wanted to talk about.

And we went to a GANS (young adult) activity where they wouldn't let us leave because they'd made a cake for Anz. Avesanis birthday, but we ended up leaving the Anziani there and getting a ride home with Jennifer and Giuseppe who said
we didn't look like we were from Utah,
which we took to be a quite nice compliment. ;)

And we went by this contact where all we knew was that her name was Angela. We knock on the door and she says,
"Come in, did you bring Angela?"
And we were like, um, you are Angela...And then we had a long discussion and apparently there are three Angelas involved in some sort of thing, but we decided to just stop trying to understand and taught a good lesson to her and her husband at the end of it all.
And then there is the "Panino King".

Do you remember when I was vegetarian? I sure don't.
So we decide to stop in this tiny grocery store on the way home for baking soda (we made cookies for our neighbors) and all the sudden this guy is like,
"I know the missionaries!!"
And apparently he had known the missionaries and they used to come by and he would make them huge sandwiches. Next thing we know he is showing us how he makes giant meat plates and he is feeding us everything. Like he wrapped raw ham around some crackers and spritzed lemon juice and pepper on it and put it on a tiny plate and made us eat it.

THEN we had to eat Boar.
And LARD.

We ate lard...
Just straight up lard...
well, on a cracker.
But still.
In broken English:
"My friends. This, this is special"
and then some cheese that costs 40 euro a kilo and some other cheese that may or may not have had wine in it (oops).
And he kept feeding us, passing it over the counter on these little porcelain plates/spoons and we of course had to eat it and I thought I was going to die and Sorella Foote thought she was going to die and THEN he gives us sauce "for your lunch tomorrow".

He said we had to come back Monday so we did and he made us sandwiches that were actually really good with Salami and fresh mozzarella and peppers and, of course, lemon juice. We took a fantastic picture, but it was on Sorella Footes camera so sadly no good visuals.
We are so sick of meat though.
We also made friends with Enzo at a bar when we asked for directions and he wanted to give us coffee and showed us all these pictures of his family.

We have knocked some doors and we keep getting responses like,
"We're not interested, but you two are lovely"
That or they think we are 15 years old.
There have been people that we have tried to go by that we were afraid we wouldn't get through the doors, but there was always someone to open up the door for us just in time.
We felt like spies, or like we were in a video game.

And the seven year old we are teaching who know everything about everything and reads all the time and uses huge words. She makes us laugh. On the ride back she and I looked through this clothes magazine and she would be like,

"this is SO pretty, do you like this?"
and I would say, "Not really"
because it would be a pair of jeans or a shirt with Minnie Mouse on it entirely in sequins and then I would be like,
"I like that"
pointing to the one normal jacket in the whole thing.
And then she would be like "
Hm, after the mission, would you like to get married?"
"Yes, I would"
"And how many children would you like to have?"
"Probably 3 or 4"
"I would like to have six. All girls."

Before dinner her mom was teasing her about how all the boys like her and she didn't like any of them
"What about Giuseppe?"
"We are separated"
"Oh, why?"
"We talked about it and we decided to separate"
. She is a gem.
Wise beyond her years.

Right now the guy next to us is singing.
It just doesn't end.
And its so lovely, I love them all so much.

And there is our dear Antonia who came to church on Sunday.
We waited outside for her to come
and then she was like,
"You waited for me!!"
And we were like, of course.

We have been teaching her with F.llo Carlucci and he is a gem.
Okay, he makes it so not everyone in Bari is crazy.

He is a classic gentleman, reminds me of Saul from Oceans 11 and he wears his wife's wedding ring on his pinky finger next to his. He told us how when his wife was dying she said that she was sorry she never listened before and that she wanted to see the missionaries, but they only had a chance to teach her once and then she lost her voice and passed away.
He loves her so much.

He is so classy and wears blue striped ties with blue striped shirts and always knows exactly what to say to Antonia because he was Catholic before and he knows how it goes and how its a hard change and he is friends with her and can be super blunt.
It is the best.

For all of you who are wondering, I am happy and healthy.

Sorella Foote and I even went running in the morning. There are always people running around this track near our house and
because we had this awful
"Oh wow, we are fat moment"

(it might have had something to with with the fact that we tried to make cookies without baking soda and it didn't work so we just ate the cookie dough--but don't worry the ones we made with baking soda didn't really work either, baking in Italy is a challenge.


Also, all the pasta/pizza/chocolate MIGHT be catching up to me)
So we are getting ourselves in shape, not to mention all the extra walking we do from always being lost. And we just had an adventure at the market where we bought about ten kili of fruits and vegetables. It was crazy.

There were fish that were still moving.
I was not happy about that, but the fruit is good, we have all these bags around our feet because we just got it and I have already eaten
a pear and a plum.

You are all beautiful people
I love you. I miss you.

But these people here sure do need me.
People don't realize true and eternal happiness is staring them straight in the face in the form of
two American girls who look like they are 12.

But we still try.

Because some things you just cant give up on.
un bacio,
Sorella Laws 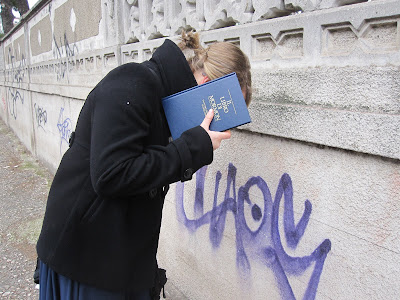 Sorella Foote trying to hear a phone call.
I thought it looked funny. 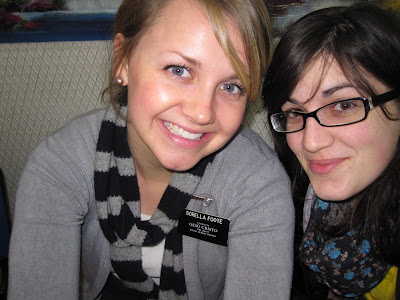 And us.
The Dream Team.

It sounds like your kind of place Lauren :0) I hope you enjoyed my e-mail. I will be sending another one hopefully this week.
Linds :0)